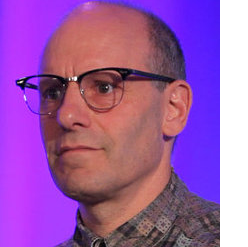 Activities in Considerate Systems Ted Selker - Director of Research on Accessible Voting at University of California Berkeley Bancroft Road Lecture Theatre BR 3.02 (preceded at 2.45pm by tea and followed by a reception - both in the Informatics Hub) All welcome (especially students), no pre-booking required

Information systems are being called upon not only to help keep us organized and productive, but also to help in the fabric of the way we live.  We are starting to see them as solving social problems as they might begin reducing disruption; they help people enjoy others or even increase self-awareness. This talk will introduce notions of how we can introduce social awareness in our design practices and artifacts.

The talk will frame the Considerate System stance of social feedback to a user.  We will describe results from a variety of Considerate Research projects, with examples including systems supporting people in audio conference call communication, TV interactions, saving energy in the Sustainability Base Leeds Platinum building and Considerate Mobile phone reactions.

In working towards considerate systems, we are building CAMEO and other technology into a cyber-physical meeting support system. This ambient social feedback system includes social responses that take into account environmental sensing, interactive TV, and physical rewards.  We conclude that all interactions with people in the physical world require an appreciation that they are in a social environment and engagement.

Ted spent ten years as an Associate Professor at the MIT Media Laboratory where he created the Context Aware Computing group, co-directed the Caltech/MIT Voting Technology Project, and directed the CI/DI kitchen of the future/design of the future project. Ted’s work strives to demonstrate considerate technology, in which people’s intentions are recognized and respected.

He is well known as a creator and tester of new scenarios for working with computing systems. His design practice includes consulting to help dozens of startups and large companies, speaking engagements, and innovation workshops.

His successes at targeted product creation and enhancement led to his role of IBM Fellow and director of User Systems Ergonomics Research at IBM. He has also served as a consulting professor at Stanford University, taught at Hampshire College, University of Massachusetts at Amherst, and Brown University.  He worked at Xerox PARC and Atari Research Labs.

Ted’s innovation has been responsible for profitable and award winning products, ranging from notebook computers to operating systems. For example, his design of the TrackPoint in-keyboard pointing device is used in many notebook computers. His visualization and visual interface work has made impacts in the performance of the PowerPC, usability in OS/2, ThinkPad setup, Google maps, etc. His adaptive help system has been the basis of products.

Ted’s work has resulted in numerous awards, patents, and papers, and has often been featured in the press.  Ted was given the American Association for People with Disabilities Thomas Paine Award for his work on voting technology, and was co-recipient of the Computer Science Policy Leader Award for Scientific American 50.