We hosted the London (East) tournament of the First Lego League this month for the third year running, welcoming 15 school teams to take part in the competition. 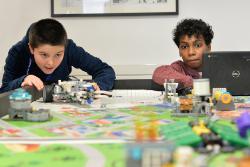 School teams from in and around London competed in the IET First Lego League Tournament this weekend, hosted by us in the Peoples Palace, Mile End.

The tournaments are the culmination of weeks of preparation, where students have worked in teams to design, build and programme a robot, and create an innovative solution to a real world problem.

15 Schools from North, East, South and West of London, Surrey, and Essex converged in East London on Saturday 20th Jan 2018 to show their work to student and staff judges from the university and run their Lego Robots against each other. Teams were from a diverse background of schooling and culture and had to present their project work, describe their robots as well as show how they worked together as a team.

Over 30 volunteers from the School of Electronic Engineering and Computer Science helped to support the event. Lecturers, admin staff, PhD students, technical staff and undergraduate students all came together to deliver the event.

The London, East Tournament was organised by Electronics Lab Manager, Mr Ho Huen who said “It’s the students, teachers and volunteers that make the event a success and this was the best yet! It was really satisfying to know the teams had a great time and were inspired by the event.”

It’s a fact that the need for engineers has never been greater. The IET supports FIRST® LEGO® League, because it equips young people with the skills that they need to become future innovators and engineers. FIRST® LEGO® League is the world’s largest STEM competition with 32,000 teams in more than 80 countries and the IET are proud to be the operational partners for the programme in the UK and Ireland.”

Winning teams from each regional tournament will take part in the UK and Ireland Final at the University of West of England (UWE) on 24th February 2018. The top achieving teams at this final get the opportunity to represent their country and the IET on a  global stage, competing at International Championships in Hungary, Estonia and the USA  in 2018.

FIRST® LEGO® League is part of a wider IET education programme, made up of a whole host of teaching resources and activities to inspire and attract the engineers of tomorrow.