EECS cleans up at QMUL Engagement and Enterprise Awards 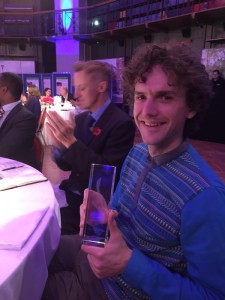 The inaugural QMUL Engagement and Entrepreneurship Awards (#EEAwards15), held last week, recognised outstanding achievement in public engagement, academic enterprise, student enterprise and public relations within the University, and projects from our School were selected more than any. Of the 13 awards handed out, EECS projects were winners a total of five times, and received a further two ‘Highly Commended’ mentions.

The event rewarded outstanding contributions made by staff and students to involve those outside the university with their work in order to share, apply and enhance research and teaching…

Dr Dan Stowell and his business partner Florence Wilkinson won the Involve award for Warblr, a smartphone app that automatically recognises birds from a simple sound recording. The award recognised the ‘citizen science’ benefit of Warblr, involving the public in collecting audio observations of birds to improve conservation and research.

Dr Andrew McPherson won the Entrepreneur of the Year award for TouchKeys, a system to add touch sensitivity to the surface of any piano-style keyboard. After two successful production runs, TouchKeys is spinning out from QMUL into an independent company.

Luna, devised by (EECS student) Soham Trivedi and Robin Bhaduri won Most Promising Student Business of the Year. Their mobile app guides you to the safest walking routes at night. Since the formation of the concept in October of 2014, Luna has grown exponentially. They are now partnered with almost every council in Greater London as well as business development districts in Camden and Waterloo to collect data. They won the iDEA award in April, and since then have partnered with Microsoft, Facebook and Barclays, as well as teaming up with Google who are covering digital infrastructure costs up to £100k. They’ve also been finalists in the Founders Forum and Santander 60 Second Pitch competitions.

The DePIC team led by Dr Nick Bryan-Kinns and Dr Tony Stockman were also ‘Highly Commended’ in the Influence Award, for their accessible peak meter project, which developed a tool that makes music production easier for people with visual impairments.