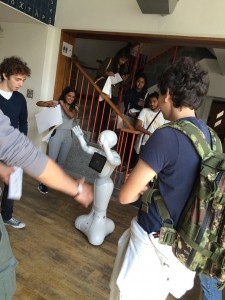 As part of the first UK Robotics Week, EECS hosted a Social Robot Hackathon over the weekend (June 25th &26th).

The event was a great success and an extra special experience for the participants as they had access to Pepper, a humanoid robot designed to perceive human emotions.   Pepper is not yet commercially available in the UK or available for consumer use outside of Japan.   EECS was extremely lucky to have five on loan from the manufacturers, Aldebaran Robotics and SoftBank.   Teams of participants, including some EECS students, made wonderful applications as part of the weelend hackathon.

UK Robotics Week is organised by the EPSRC UK Robotics and Autonomous Systems Network (UK-RAS Network), the week opened with a series of events across the country that aim to get the public engaged with the developments and debate in and around robotics.

As well as aimed at inspiring young and older people through a number of challenges targeted at schools, academia and industry, the week will demonstrate the high quality research taking place in the UK’s universities.

Professor Guang-Zhong Yang PhD,  FREng, Director and Co-founder of the Hamlyn Centre for Robotic Surgery at Imperial College London and Chair of the UK-RAS Network said: “The UK is home to some of the most innovative robotics research centres in the world. UK Robotics Week provides a unique opportunity to start discussions on how robotics and artificial intelligence will change our lives. The wide range of programmes across the country, during the week, offers the general public opportunities to learn about the current state-of-the-art in robotics and future trends.  Furthermore, competitions such as the School Robot Challenge will spark children’s interest in science and technology and help equip them with necessary skills for the future.”

Professor Philip Nelson, Chief Executive of the Engineering and Physical Sciences Research Council (EPSRC),  said: “There can be little doubt that Robotics and Autonomous Systems (RAS) are going to change many aspects of our lives. We are near to realising a world where machines not only address laborious, repetitive or dangerous tasks on our behalf, but one where they act cooperatively with us, drawing on knowledge and experience to learn and to help us take decisions. I hope that the first UK Robotics Week will inspire the next generation of scientists and engineers to push the boundaries further. I am sure everyone involved, from children to industry to government, will enjoy taking part.”

In a poll, commissioned by the UK RAS Network ahead of Robotics Week, more than a quarter of UK adults said they believed the biggest benefit of driverless cars will be fewer road accidents.

Twenty six per cent of respondents, representing a cross-section of UK adults, think that the biggest benefit of the introduction of autonomous vehicles – such as the Google Self-Driving Car – will be a reduction in the number of road accidents1.  A fifth (20.7 per cent) believe that their road rage would decrease.

“While widespread advent of fully autonomous,  ‘never-need-a-driving-wheel’ self-driving cars is sometime away the possibilities for safety, economy and efficiency of these devices is breathtaking,” said Professor Paul Newman, who is leading Oxford University’s internationally acclaimed Mobile Robotics Group that develops self-driving cars and related technologies.   He added: “Early and thoughtful engagement with users - their fears, aspirations and expectations is all part of the development of the technology.”

Other key findings of the research into public attitudes to robotics advances include:

While men believe automotive will benefit most,  women voted medicine the top sector to gain from robotics technology during the coming decade (20.3 per cent)