Topby Harris, a PhD student form EECS won the overall prize in a national photo competition with an image of robot that can tailor its stand-up comedy routine in response to the audience’s reaction. 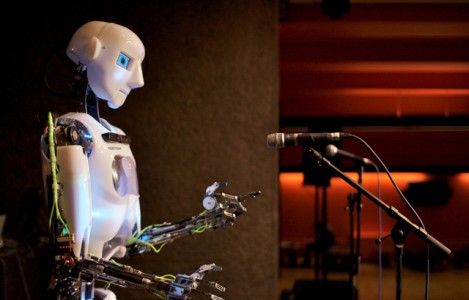 Topby Harris, a PhD student form EECS won the overall prize in a national photo competition with an image of robot that can tailor its stand-up comedy routine in response to the audience’s reaction.

Comedy Lab: Human vs Robot, by Toby Harris, a PhD student at Queen Mary’s Cognitive Science Research Group stole the show ahead of many other stunning pictures, featuring research in action, which were entered into EPSRC’s (Engineering and Physical Sciences Research Council) inaugural competition.

Winner Toby Harris said: “We’re thrilled that our experiment pitting human stand-up comedians against a robot is inspiring others. This ground-breaking research is helping us to understand both what makes for a great performance and what makes for a compelling audience experience. We use new technologies to analyse people’s moment-by-moment responses, so while teaching a robot stagecraft was fun, it was the ability to read and react to the audience that made it work.

“More than the creative industries are at stake here - by better understanding what happens between performers and audiences, we should gain new insights into the value of bringing students together for class, or workers to a conference table.”

The competition’s five categories were: Weird and Wonderful, Discovery, Equipment, Innovation, and People.

Dr Chrisantha Fernando also from the School of Electronic Engineering and Computer Science won third place in the People category with a photo of academics and software engineers enjoying machine learning a version of the game charades.

Congratulating the winners and entrants, Professor David Delpy, EPSRC’s Chief Executive, said: “The quality of the entries made judging extremely hard but very inspiring. The breadth of images and imagination exhibited demonstrate the talent, both scientific and artistic, that resides in our community.”

The first, second and third prize winning images with short descriptions are all available to download from the EPSRC’s website.