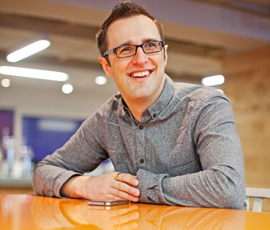 Brett Osler, a third year Computer Science and Business Management student, entered Rightmove’s ‘Bright Sparks’ competition after it was promoted through QM’s School of Electronic Engineering and Computer Science. It was suggested by course leaders that competition entries could also be used for final-year projects.

A group of applicants selected by Rightmove, from QM and two other universities, were given business scenarios for which they had to find a solution. Brett was asked to create an electronic solution for keeping a property viewer organised.

He designed an iPhone app for house viewers, an app for property agents, and created a computer programme that handled bookings between viewers and agents.

“The app contains everything a potential buyer needs to keep track of the properties they’re viewing,” says Brett. “For example, it lists information about the property, important contact details and information about properties in the surrounding area. Importantly, it uses ‘Push Notifications’ to contact the agent through another app, to co-ordinate viewing times between the viewer and an agent.”

Two other QM students, Fergus Strange and Martin Themudo also impressed Rightmove and have been offered 12-week internships with the company’s development team.

Upon receiving his £5,000 prize, Brett commented that he would put it toward his fiancée’s engagement ring, pay his credit card bills, and treat the friends who supported his work to a nice dinner. After graduating this summer, he will begin work with Credit Suisse as a software developer.

Professor Peter McOwan, Queen Mary’s Vice Principal for External Relations and Public Engagement, supervised the Rightmove projects. He says: “Brett did an excellent job. Working with external companies on real products gives students so many of the professional skills they need to find employment.”

Sarah Brown, Social Media Manager with Rightmove added: “Brett’s win is thoroughly deserved, given the additional work he had to put into the project after submitting it to QM as part of his course, as well as his eagerness to always be early so that he had a chance to set up!

“The competition has been a great success and we’ve been thoroughly impressed with the calibre of students from Queen Mary. I hope that we can continue to work closely with the College on future projects.”