1st year student Balwinder Singh was chosen as one of only five students from UK universities to attend the event held in Amsterdam this month. And after three days of workshops and challenges, his team walked away as winners of the final challenge - to design a solution to reduce food waste. 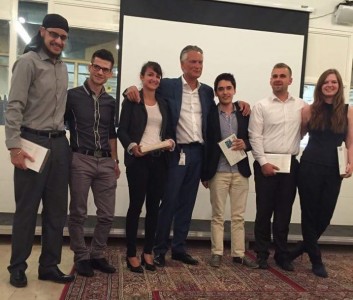 1st year student Balwinder Singh was chosen as one of only five students from UK universities to attend the event held in Amsterdam this month. And after three days of workshops and challenges, his team walked away as winners of the final challenge - to design a solution to reduce food waste.

1st year student Balwinder Singh was chosen as one of only five students from UK universities to attend IBM’s Best Student Recognition Event held in Amsterdam this month. And after three days of workshops and challenges, his team walked away as winners of the final challenge - to design a solution to reduce food waste.

In all, 80 students were chosen to attend from 34 countries across Europe, the Middle East and Africa (EMEA), and Balwinder was chosen as one of five representing UK universities. The students had a unique opportunity to network and attend workshops uncovering IBM’s strategy, business and research. The event culminated in the students forming 10 multi-national teams to take part in a challenge judged by a Dragons Den-style panel. And, as if the excitement of being selected to attend in the first place wasn’t enough, Balwinder’s team were chosen by the panel as winners of the challenge.

Balwinder (who’s studying on our BEng Multimedia and Arts Technology programme) gave us this report on the event:

The ‘Best Student Recognition Event’ is held annually by IBM; the event brings together some of the brightest minds of EMEA to nurture creative thinking in the areas of business and technology, focussing on IBM’s strategy, research and essentially their vision. This year I had the privilege of being nominated by the EECS department and being selected by IBM to attend the ‘Best Student Recognition Event’ in the beautiful city of Amsterdam, specifically at the IBM Client Centre and B.Amsterdam. The theme for the event this year was “Smarter Food: don’t waste it, taste it!”

There were individuals in attendance from multiple fields of expertise, including computer science, engineering and business management.

The event started by introducing design-thinking in the form of a mini challenge. We were split into teams to tackle a marshmallow challenge to help us better integrate with one another, and more importantly, it allowed us to become a team rather than a group of individuals.

Over the three days we had the opportunity to network, explore and tackle a variety of other challenges. The experience encouraged interest in information technology, while also allowing for an understanding of its implications. Everything revolved around the audience, and the individual at whom you targeted your solution. How can we make that person utilise our product? Answering this question was key to being able to successfully tackle the challenges presented.

The event culminated with a final challenge to develop a technology related solution that would help reduce consumer food waste. Having set the vision for my team to create an ecosystem that would empower the individual, while simultaneously reducing their food wastage footprint, we developed a solution named ‘FoodPrint’. It would be rolled out in phases, beginning with smart-fridges where nudges would be utilised to influence proactive action against food wastage. This would revolve around big data stored in the cloud, and also behavioural data being generated via personal smart devices. This whole concept was a result of the internet of things, and the future towards which we are moving. So for example, if you were shopping and went to pick up eggs, an app on your phone would communicate with the smart-fridge to determine if you already had any eggs, if this was the case then you would be informed that you did not require further eggs, thus reducing your overall FoodPrint. To incentivise consumers we also came up with a point system which would function through partnerships with organisations to offer rewards due to such behaviour, as well as a leader board which would be generated to introduce a game element, further extending the audience reach of the product.

We were required to pitch our idea in the form of a ‘Dragon’s Den’ situation. To make an effective pitch we simplified it into four elements: What is the problem? What is our solution? How can it be implemented? What is the future of our product?

Once all 10 teams had pitched their ideas, my team was able to successfully gain the backing of the ‘Dragons’, and we were awarded Arduino kits. We as a team were elated to have come up with a solution tackling such a prevalent issue. However, we also agreed that the other solutions presented were also equally deserving winners.

Summing up, the whole event was unforgettable, and I feel privileged to have both been able to share and work with such smart, intellectual individuals. In addition, I had the fantastic opportunity to experience the beauty of Amsterdam! As millennials I felt empowered to tackle such issues for a better future. I would like to say a massive thank you to IBM for both inviting and arranging such an event, and also enabling me to make new friends. Finally I would like to paraphrase what was said by Harry Van Dorenmalen (Chairman for IBM Europe and General Manager for IBM Benelux) who presented our awards at the event - “When working it is important that you have enjoyment, and also, the greatest fulfilment comes out of helping others realise their potential”.