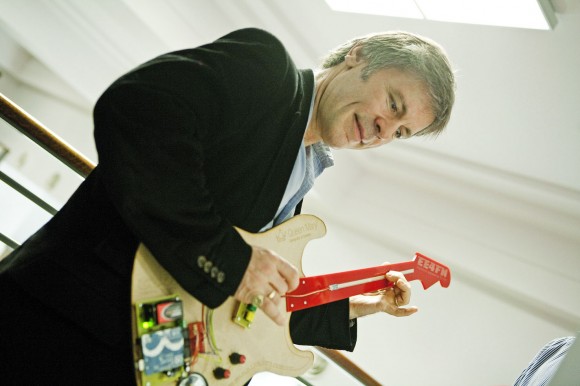 Bruce Dickinson, lead singer of legendary heavy metal group Iron Maiden, became the first rock star to play the EECS Arduinator. Dr Dickinson, who is a QM History alumnus, musician and airline pilot, was keynote speaker at the QM Innovation Showcase, when he also demonstrated how even a simple electronic guitar like the Arduinator can rock. This electric guitar, based on the Arduino open-source microcontroller platform, was constructed by Andrew McPherson and Ho Huen from EECS as part of our school outreach programme. When not being played by rock stars, the EECS Arduinators are taken round the country to encourage teenagers to explore basic electronics. Those interested can make them at home: http://www.cs4fn.org/arduinitar/