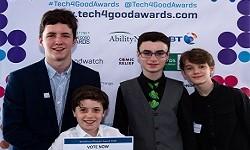 Four young engineers of the future, who were regional Institution of Engineering and Technology’s (IET) First LEGO League winners at Queen Mary University of London in January 2018, have been nominated for the AbilityNet Tech4Good People’s Award and the Young Pioneer award, sponsored by BT.  The AbilityNet Tech4Good Awards recognise organisations and individuals who use digital technology to improve the lives of others, harness the power of technology to benefit the community and make the world a better place.

Called the Water Watcher, the device reminds people to turn the tap off by using an in-built vibration sensor and timer which sounds an alarm if the water has been left running for too long. The device is designed for those who have illnesses such as dementia or who are visually impaired and helps protect precious supplies in the water-stressed south east region.

Electronics Teaching Lab Manager at Queen Mary University, Mr. Ho Huen, said of the group's success, 'It’s really amazing and satisfying to be able to see the team progress on this journey from its beginnings at our First LEGO League regional tournament. The School of Electronic Engineering and Computer Science is always in support of aspiring engineers and great to see it coming from our outreach activities. We work hard to put on a good First LEGO League event and this is the priceless return that we get!'

To find out more about the group's project and to vote for Water Watcher, visit: https://www.tech4goodawards.com/finalist/water-watcher/