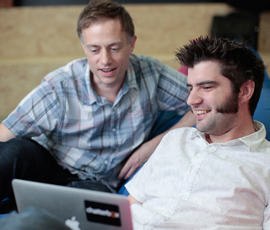 A commercial venture and spin-out company of Queen Mary, University of London, has won a highly sought after place on a fast-track programme for young businesses.

In March 2012, technology accelerator Wayra called for start-ups to submit their business ideas for the chance of a place at the Academy. Following ‘Wayra Week’ - a three day round of pitching - some 30 finalists presented to a panel of judges, who picked the 16 winning applicants.

The Chatterbox team will now have access to funding worth around £40,000, including Wayra Academy office space on London’s Tottenham Court Road and the use of Telefónica’s expertise and tools.

Since winning the competition, they have presented Chatterbox to some 700 people at Telefónica in Twickenham and Manchester. After a six-month residency at the Academy, the start-ups will pitch again to Telefónica and other venture capitalists, hoping to secure further funding in exchange for a stake in the business.

Chatterbox was founded in 2011 by Dr Stuart Battersby and Dr Matthew Purver, of the Interaction, Media and Communication group at Queen Mary’s School of Electronic Engineering and Computer Science.

The company’s unique cloud software platform allows users, such as market research or public relations agencies, to see who is driving discussions about brand-related issues through Twitter. Their analytics software determines who the key opinion drivers are within social media communities. Statistics on the content of messages can determine whether the conversations are positive or negative, giving organisations vital knowledge with which to interact with an audience.

Dr Battersby comments: “This investment by Telefónica will allow further and faster development of our Conversation Platform.  For an organisation at our stage of development, working closely with a large partner in the industry is invaluable; we can really build robust and scalable enterprise software guided by the real world needs of Telefónica’s global brands.”