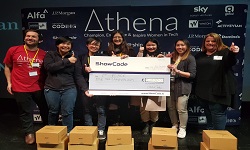 The School of Electronic Engineering and Computer Science, with support from the Institute of Coding and in partnership with ShowCode, hosted Athena 2019 on 13-14 April which included an all-female Hackathon, an industry careers fair, coding workshops run by Makers, Cisco and Capgemini, and a day of talks from Microsoft, JP Morgan, Lloyds and CodeFirst:Girls to name but a few. The event provided a platform for women in technology to inspire others to join the industry, to showcase talent, and highlight the breadth of opportunities in the sector for women.

Isobel Bates, Institute of Coding Project Manager at Queen Mary, said: ‘We were delighted to host this event that showcased the skills of women in Digital Technology, too often underrated in this country, and to see so many women from across the UK attend’. 24 teams from as far as Edinburgh and Swansea participated in the Hackathon, all working towards impressing the panel of judges with their digital solutions for reducing our plastic consumption and plastic waste in our oceans. Teams were competing to win £5,000 and an opportunity to seek financial investment from SKY Ocean Ventures.

The winning idea was ‘BoraBags’, a rent-a-bag system where shoppers can pay £1 to rent a high quality shopping bag at their local supermarket, receive a £1 back when they return the bag on their next trip and receive 10 reward points, which they can then redeem for vouchers and other offers from participating retailers for each bag returned. The winning team (pictured) were CAXXY, a team who met for the first time at the event.

Queen Mary medical student, Anoushka Sharp, was also awarded Sparta Global’s ‘best pitch’ prize and won an Amazon Echo Dot for the presentation of her idea to take the plastic in the ocean, break it down into atoms and repurpose it.

Attracting more women to the tech industry and boosting equality in the sector is vital if the industry is to remain competitive in a global market. The tech sector is growing twice as fast as the rest of the economy and government research suggests that more than 500,000 highly trained computer scientists will be needed by 2022 to satisfy the demand in the economy and to keep the UK at the forefront of digital innovation. Many will need a wider skills base to be more attractive to employers, but with female programmers and software developers currently making up just 3.9 per cent of tech and telecommunications professionals in the UK, intitiatives such as Athena 2019 and the Institute of Coding are playing a crucial role in narrowing this digital skills gap.