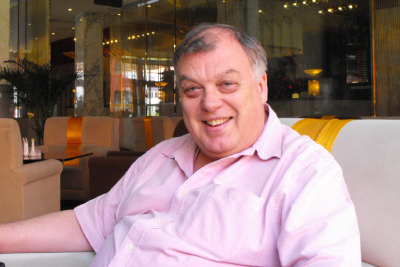 It is with great shock and sadness that we share the news about the passing of Professor Laurie Cuthbert on Monday.

Laurie was the Head of the Electronic Engineering department before the merge with the Computer Science department, which we now know as the School of Electronic Engineering and Computer Science. He was a pioneer and instigated our joint programmes with Beijing University of Posts and Telecommunications. Much of the success of the School of EECS today should be credited to Laurie’s vision.

Laurie studied at Queen Mary as an undergraduate, went to industry for a short period after graduating, then came back to do a PhD, and stayed at Queen Mary until retirement.

He was a visionary leader with ambition and determination. He helped to focus electronic engineering on the electronic and digital rather than just the electrical, and in the process brought to Queen Mary an astonishing range of people who established their careers here, and some of whom have gone on to do great things elsewhere. He led the department’s expansion in research, producing a department with a really strong grant portfolio, a large number of PhD students and successful masters programmes in areas such as telecoms.

As Head of Department, he was early to see the potential of working with Chinese partners and instigated a joint programme with the Beijing University of Posts and Telecommunications. This was trailblazing not just for Queen Mary, but also nationally for China, being the first joint degree programme approved by the Chinese Ministry of Education. He was the founder and the first Queen Mary Director of the QMUL-BUPT joint programme, the first trans-national education (TNE) programme of its kind between the UK and China in 2004. He is the father of TNE at Queen Mary. His pioneering work led to three major TNE operations in China, making a profound impact on Queen Mary's position in the international HE landscape. Laurie inspired and influenced many University staff, recruiting a lot of them, and helping them to advance their careers.

Laurie was the Head of the Electronic Engineering Department from 1999 to 2008. Towards the end of the period, the decision was made to merge the Electronic Engineering and Computer Science Departments, in order to produce a combined School that would stand as one of the top digital departments in the country. As one of the two Heads involved, Laurie helped to handle the merger with generosity and integrity. The result was not just the successful School we have today, but a merger that was achieved without losing academic staff in the process.

"Laurie was my MSc/PhD supervisor, as well as my mentor after joining Queen Mary. I have learned a great deal from him over the past two decades. Condolence messages from alumni and friends in China are flooding into various of social media groups, bringing all the warm memories of Laurie back to life."

"Laurie was my PhD supervisor. He always gave me support and confidence in what I was doing, this was so important. He always had a joke to tell us, and I remember when we all used to get together in the Senior Common Room to have lunch and talk with other academics. That gave me a sense of belonging."

"Laurie was instrumental in the School's development over the last 20 years. He was visionary in areas others didn't see, or weren't prepared to take risks in. He was very supportive and giving to many colleagues, always being constructive."