Researchers use AI to reveal hidden properties of materials

Scientists from Queen Mary’s School of Electronic Engineering and Computer Science have used an AI Artificial Intelligence (AI) approach to ‘fingerprint’ existing materials and use this information to discover new ones. 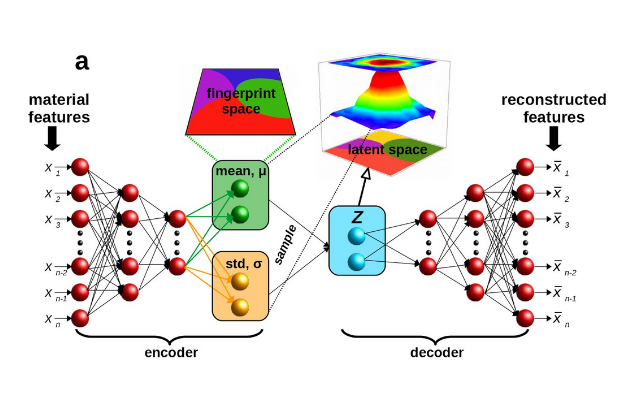 AI is increasingly being used to accelerate the discovery, manufacture and deployment of materials. In this study, published in the journal npj Computational Materials, the researchers used an artificial neural network to uncover information hidden in material fingerprints and reveal useful material properties from their chemical formula.

The research, led by Professor Yang Hao, focused on a specific group of materials, disordered perovskite-type materials, which have a wide range of applications ranging from solar cells, memory devices and superconductors to lasers and antennas. As only 0.4 per cent of all theoretically possible perovskites have been synthesised so far, this group of materials provided a good opportunity to test the discovery of new materials in a target-driven manner.

At the same time a deep neural network (DNN) was employed to learn a unique numerical representation of perovskites based only on their chemical formulae. The DNN, containing several layers, is trained to predict nothing but the input itself at the output layer, manifesting the unsupervised nature. The network contains an ‘information bottleneck’, from which the original input must be reconstructed with minimal loss of information. As the information bottleneck becomes much smaller than the input dimension, the DNN is forced to learn a robust low dimensional representation for each material, designated as the material fingerprint.

Unlike most studies in this field that focus on predicting the properties of materials using supervised DNNs, analogical materials discovery aims to recover information embedded in a neural network that is not trained to predict any material-specific properties. The researchers found that over 70 per cent of the time, materials that had similar fingerprints belonged to the same crystal structure even though information on the crystal structure of the material was not originally supplied to the AI model.

Achintha Avin Ihalage, a PhD student at Queen Mary, said:  “We believe analogical materials discovery can help to bridge the gap between the existing materials literature and the undiscovered composition space. We think it could be particularly useful in finding eco-friendly and inexpensive alternatives to current hazardous materials such as lead-based ceramics.”

“Computational methods such as density functional theory (DFT) are successful in simulating the properties of ordered materials but become extremely computationally demanding or even intractable for disordered and compositionally complex materials. This research demonstrates how AI material fingerprinting can help find a reference crystal structure for unstudied compounds to efficiently drive DFT computations.”