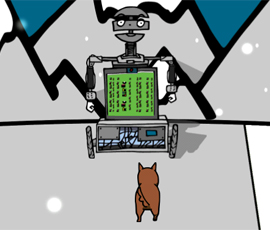 Robot Road Run is a free to download iPhone game app, in which you take command of a robot called FLASH as he rushes along the road against the clock, collecting bolts and batteries, meeting and greeting people and avoiding pesky cats and dogs.

Users can play in different scenarios with varying levels of difficulty and can brag about their success with friends through the game’s social network links.

FLASH can recognise the expression on the faces of people he passes and respond with his expressive turtle-inspired robot head. Players need to help FLASH master these social niceties to gain bonus points.

Robot Road Run was developed with Portuguese software company Stand Clear Ltd through Queen Mary’s app development group, QApps. The game is inspired by technology developed and explored in the Living with Robots and intEractive Companions (LIREC) research project - an international project aiming to advance the relationship between robots and humans through the creation of emotionally intelligent companion technology.

FLASH’s appearance is based on the real-world EMYS robot head, built by the Wroclaw University of Technology in Poland under the LIREC project. Aspects of the game, from the behaviour of the animated dogs to the face recognition software are also influenced and inspired by LIREC robotics research from across Europe.

Peter McOwan, LIREC project coordinator says: “The game is great fun to play, and also helps get people interested in the science and technology ideas we developed in the project. Robotics can be a great future career for young people to consider and I hope this app helps inspire the next generation of researchers.”

The app is available to download now from the iTunes store.