Professor Dino Distefano has today been awarded a Royal Academy of Engineering Silver Medal for his contribution to society. 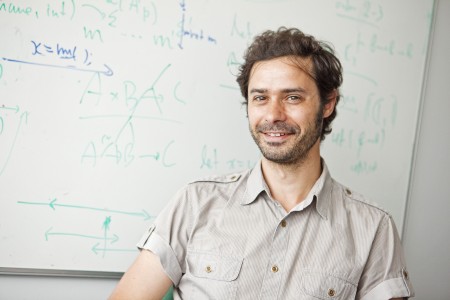 Professor Dino Distefano has today been awarded a Royal Academy of Engineering Silver Medal for his contribution to society.

Congratulations to Professor Dino Distefano who has won one of the four annual Royal Academy of Engineering Silver Medals for the year.

The coveted Silver Medal award was established 20 years ago to recognise an outstanding personal contribution by an early or mid-career engineer that has resulted in successful market exploitation.

Professor Dino Distefano is the co-Founder and CEO of Monoidics, a start-up company that was acquired by Facebook in 2013, a Professor of Software Verification at the School of Electronic Engineering and Computer Science, Queen Mary University of London, and a former Royal Academy of Engineering Research Fellow. Dino is one of the world’s leading experts in the process of automatically finding errors in software systems. This is only becoming more important as society becomes increasingly reliant on software-based systems, and less tolerant of errors.

Dino’s advances in this field have contributed significantly to the UK research community being recognised as a world leader. The code-checking start-up Monoidics, which he co-founded in London’s Silicon Roundabout in 2009, was acquired by Facebook in 2013. Prior to the acquisition, Monoidics’ commercial products were utilised by major organisations in security, avionics, and consumer electronics.

The scale of technical advances that Dino has made in this field is striking. When he began in 2004, tools for verifying properties of pointers were applied to toy programs of tens or hundreds of lines. Now, Dino’s ideas are being applied to industrial software systems of over a million lines of code.

The Silver Medal was established by the Royal Academy of Engineering in 1994 to recognise an outstanding and demonstrated personal contribution to British engineering, which is resulting in successful market exploitation, by an engineer with less than 22 years in full time employment or equivalent on 1 January in year of award and who will normally be Chartered. Up to four medals may be awarded in any one year. For more information, including previous winners, please visit: http://www.raeng.org.uk/prizes/silver.

The 2014 Silver Medallists are:

The four medallists were selected from a long list of nominations, drawn from all areas of contemporary engineering. They were chosen by a panel of Academy Fellows who have expertise across the range of engineering disciplines, as well as personal entrepreneurial experience.

The Silver Medals recognise individual excellence, not only technically, but also in the ability to turn knowledge and ideas into useful, wealth-creating products and services. This is essential to UK economic prosperity, and this year’s winners are all excellent examples of the kind of world-class entrepreneurs that the Academy is championing through its Engineering for Growth campaign and supporting through its Enterprise Hub.

The UK boasts world-leading expertise in digital security, computer programming, aerospace, and manufacturing, and our 2014 medallists demonstrate the strength of knowledge and skill in these areas that will enable us to maintain this position for years to come. They are outstanding role models for the next generation.