Being a female backend Software Engineer can sometimes be daunting. However, as the world progresses, so does tech, and I’ve had incredibly wholesome discussions with non-female people who are very passionate about making the industry more welcoming, as well as them calling out people who have had unconscious bias. 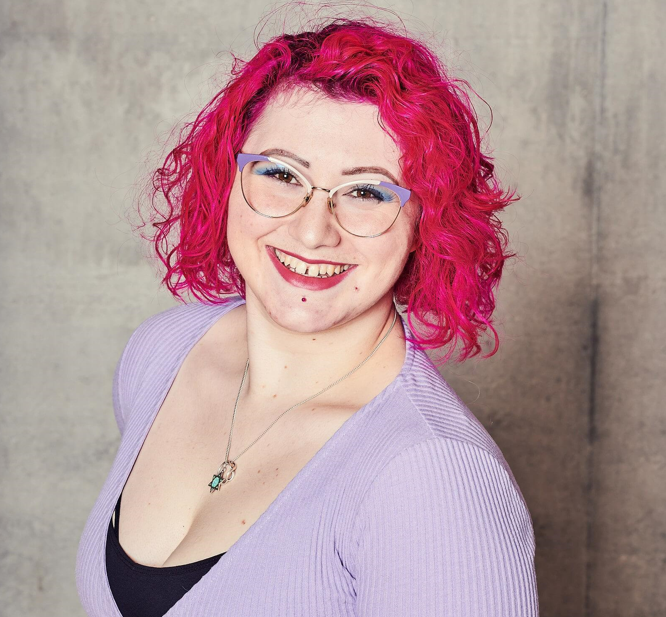 Tell us a bit about your time at Queen Mary.

I really enjoyed the varied modules at Queen Mary for Computer Science. I felt that it provided a crucial foundation for specialising within the field. Whilst I wasn’t very involved in any societies, I did have a service dog (diabetic alert dog) and was very impressed with how accommodating the university was. A special moment for me was during graduation as my dog had his own cap and gown for when he walked the stage with me. I found the professors were very interested in him and also spoke to me about advancements in diabetes technology that they knew about.

Describe your career path since graduating including your current role as a Software Engineer at Dojo.

After graduating, I joined ASOS as a backend Software Engineer. This role involved being hands-on for the whole development journey, from talking to stakeholders and gathering requirements, to discussing test strategies, to the actual implementation of the code and testing it, and to the maintenance of the software in production. This was exciting, and I was able to work on very complex systems. I then moved into a DevOps/Platform Engineering and Site Reliability Engineering role for a year. This focused on the building and deploying of code in the cloud worldwide, as well as things like the network protocols, security and production fixes to do with infrastructure. I also worked on cross-team solutions to recurring problems. During this year I supported 11 teams internationally, which really let me meet a big variety of people. In August 2021 I decided to move to Dojo and return to being a backend Software Engineer as this is my passion. I’m currently working in the Shared Application Services team, which focuses on non-product codebases that are used across the whole company.

What attracted you to Dojo as a company and how does your job allow you to explore your passions?

A friend recommended me for Dojo and told me about how they were looking for people who are genuinely passionate about writing good code. I decided to apply and found that Dojo is a really exciting company, which has since been voted as the 3rd best workplace for women in 2021. They are really good with flexible working, but have also made sure that the office is fun and has an overall good vibe. They are a dog friendly office, although when I go in Sweeney (my service dog) is often in ‘work mode’, meaning you can’t interact with him, but I do give him periodic breaks where he gets to play with the other dogs. During my interview at Dojo, I instantly got on with my manager and knew straight away that he was passionate about the same things that I am when discussing software engineering practices – I even ranted for 15 minutes about a concept called Code Craftsmanship in my interview! Due to this rant, during my first week I was asked if I wanted to be part of a webinar for the Athena Showcode hackathon, which was a hackathon for women and non-binary people in November, and if I would present a webinar on Test Driven Development with Code Craftsmanship. It was really rewarding and felt great that from the beginning I was surrounded by people encouraging my passions and celebrating them. The webinar was a success and is now on YouTube. Watch the webinar and access the resources for the webinar.

There is a certain amount of confidence I sometimes have had to find when I’ve joined a meeting with 20 other men, all older than me, and there I am wearing glittery makeup and worrying about if they will take me seriously, but I’ve found that they don’t care how I look or that I’m a woman, it’s ultimately my skillset and expertise that is the important factor.

How did your degree prepare you for your current job role and are there any particular areas of your degree that you use in your day-to-day job?

Learning how to work with a variety of people who have different abilities and interests was one of the most important life lessons my degree taught me. It’s not just about writing code, but clearly conveying your own skills and passions and driving that innovation that Queen Mary taught me. My degree also covered some really crucial topics that I can now look back on and appreciate the importance of, such as design patterns and drawing diagrams that represent your system.

What is it like to be a woman working in the tech industry?

Being a female backend Software Engineer can sometimes be daunting – I am the only full-time woman in my team for example (there is a part-time female QA in my team who works across multiple teams). However, as the world progresses, so does tech, and I’ve had incredibly wholesome discussions with non-female people working in tech who are very passionate about making the industry more welcoming, as well as them calling out people who have had unconscious bias. My team encourage me and most importantly respect me for who I am and what I am passionate about and what I deliver – the fact that I have bright pink hair and enjoy makeup makes no difference to my abilities and performance. There is a certain amount of confidence I sometimes have had to find when I’ve joined a meeting with 20 other men, all older than me, and there I am wearing glittery makeup and worrying about if they will take me seriously, but I’ve found that they don’t care how I look or that I’m a woman, it’s ultimately my skillset and expertise that is the important factor.

The most important thing in a career in tech, especially software engineering, is to be passionate and interested in it. It’s an industry that is constantly changing and evolving and you need to be keen enough to keep up. It does become quite addictive though!

I always enjoyed problem solving and logic, but I wasn’t any good at maths. I started looking into degrees related to maths and came across Computer Science. Soon after I met my partner who was a fullstack Software Engineer, and together we built a very basic calculator. This was my first introduction to code, and I was instantly hooked. My experience in tech has always been very code heavy and I love getting ‘my hands dirty’ in the code, but I have a huge admiration for people who are more artistic and can do front-end technology, as well as people who can handle the organisation needed for roles such as Product Managers, Agile Coaches, Business Analysts etc. My biggest advice for women is honestly to just try things out – get your hands dirty. You’ll try things, and they might totally flop (like the original calculator that got me hooked – I really am bad at maths!). Ultimately, the best way to learn is to fail and learn from those mistakes. I’ve found a lot of my male colleagues were introduced to coding and tech at a young age through school and video games, whereas I wasn’t. This gave them the confidence to try things out as they weren’t as self-conscious about messing things up. The most important thing in a career in tech, especially software engineering, is to actually be passionate and interested in it. It isn’t just an easy way to make money, it’s an industry that is constantly changing and evolving and you need to be passionate and excited and keen enough to keep up. It does become quite addictive though!

How do you actively inspire other women to follow in your footsteps and pursue a career in tech?

I really enjoy mentoring – when at ASOS I attended various events for GCSE and A-Level aged people who wanted to learn more, and ASOS wrote an article about me when I was a Platform Engineer. I also ran the webinar I mentioned that was focused on women and non-binary people. I would say one of the biggest impacts I personally found was actually seeing other women in tech and their pride and passion about their roles. One of my role models now is actually Margaret Hamilton, who was the first software engineer for the Apollo moon landing, whilst also being a mum to a young child. I recently came across an interview with Margaret Hamilton that I found so moving and I’ve found that being a loud, feminine, confident woman in tech has helped spread confidence to other women. I’ve had multiple female colleagues of all ages tell me that I’ve helped them become more confident because I’m authentically myself, regardless of being a woman with a service dog or being (on average) younger than my peers.

Why do you think there is a need for more women/diversity in the tech industry?

I think that tech needs to reflect the real world more, otherwise you end up with products that don’t work in the real world as only a portion of their userbase tested it – such as period tracking apps that just assume every woman has a 28-day cycle! And I think that the key thing is diversity – this means more WOC and non-binary people and people from more varied backgrounds. Interacting and working with such a wide range of people is so rewarding and opens you up to so much. It helps you grow as a person, and teaches you to think in completely different ways, and this is an important thing in tech. When you are building a service, you often don’t know exactly who will use it, but by having an open and varied mindset you design and implement better services and think of things you’d never naturally have thought of!

What are your career plans for the future?

For now, I plan on really strengthening my current skill set as a backend Software Engineer. I plan on staying in the tech lane (i.e. not being a manager), as I think this will allow me to keep on doing what I love (writing software), and mentor people and spread my passion for well-written code!

What key advancements do you think we will see in tech over the next 10 years?

I honestly can’t tell. Tech has advanced so much in the last 10 years, and I’m honestly just excited to see what happens!

This profile was conducted by Alumni Engagement Officer, Nicole Brownfield. If you would like to get in touch with Sarah or engage her in your work, please contact Nicole at n.brownfield@qmul.ac.uk.