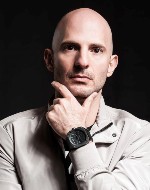 Investigating The Semantic Wave in Tutorial Dialogues: An Annotation Scheme and Corpus Study on Analogy Components

In terms of public engagement, Jorge attended an invitation to Sonar+D in Barcelona, Spain, in 2019, where he imparted a Masterclass on Conversational AI and Speech Enabled Experiences. He also was invited to chair the Conversational AI Summit in London, England, in 2019. During the same year, Jorge organised and imparted a talk on “Innovation and Entrepreneurship in Artificial Intelligence, Natural Language Processing and Dialogue Systems” in Monterrey, Mexico.

Regarding artistic outputs, in 2018, Jorge exhibited  "Unspoken Word", an interactive installation that converts poetry into music at ARS Electronica in Linz Austria (2018).