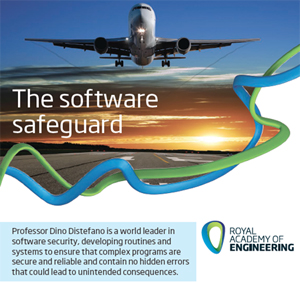 These techniques resulted in the industrial program analysis tool INFER developed by Monoidics Ltd, and used by customers across the world. The verification algorithms developed at Queen Mary and Imperial were also incorporated in Microsoft tools used to secure Windows device drivers.

The research has had an economic impact and an impact on public services. Academics at Queen Mary and Imperial College looked at a series of fundamental problems in computer science. Their work turned into research that focussed on automatic memory safety verification for critical software. That innovative and breakthrough research had a significant impact on the academic world, and also proved to have enormous industrial potential. Partners across academia and industry collaborated to maximize the commercial and real-world impact of this game changing research.

One example of deep computer science being put into practice in the Old Street area is Monoidics, a software verification provider whose technology is based on research at Queen Mary, University of London and Imperial College London.
InformationAge[l3]

This London-based start-up company was founded in 2009 by Distefano & Calcagno, and has grown to include offices in the UK, USA and Japan. Monoidics markets INFER, an automatic program verification tool which builds on ideas in R1-R5 below. Monoidics has ten employees (8 in UK), seven of whom hold advanced degrees, and a revenue of £588,000 in 2012. Customers include government agencies and industrial clients like Airbus, ARM, Lawrence Livermore National Laboratory, Mitsubishi and Toyota.
Recently Monoidics has been acquired by Facebook to improve the quality and the security of their code base. Within Facebook, the verification technology originally designed by Distefano and Calcagno will impact over one billion users of this very public social networking service. [l9]:

This asset acquisition represents our investment in the quality of our mobile applications platform and also our people, as members of Monoidics talented engineering team will join us to work at Facebook’s London office once the deal closes
Head of Facebook London commenting to The Telegraph[I2]

There are separation logic-based tools being implemented in Microsoft's labs in Redmond and Cambridge. One of these, SLAyer, was released in 2011, and has been applied to numerous Microsoft device drivers [I1], where it has found bugs missed by Microsoft’s powerful collection of analysis tools. SLAyer builds on the ideas of Calcagno and Distefano found in publications R1 and R2 below. Microsoft's Cambridge lab has at least two full-time researchers and one software engineer working on Separation Logic based Analysis Tools (based on Calcagno and Distefano’s work) from PhD's in the UK (one from Cambridge, two from QM). Microsoft has hired upwards of 10 post-docs and interns to work on Automatic Analysis Tools based on Separation Logic.

Several routines of Windows device drivers were analysed with this technique and numerous real bugs were uncovered, and confirmed by the Windows Kernel Team.[I1]. The impact of this work on improved Microsoft Windows reliability is worldwide via release of improved drivers.

The problem of verifying that programs correctly and safely manipulate computer memory is at least 30 years old. Verification is imperative as such programs are often critical code in IT and Engineering systems: if memory errors occur there may be fatal consequences for overall system missions (e.g. safety of a plane in flight).

The development of this technology is based on research into logics for reasoning about memory use and the algorithms giving partial decision procedures. Key stages include underpinning work on substructural logic by Pym and O’Hearn at Queen Mary [R6] which was equipped with primitives to describe heap structure in joint work between researchers at Queen Mary and Carnegie Mellon (eg [R7]). This formed the first effective theory for reasoning about computer memory, with, initially, hand-coded verification of standard systems algorithms, and then the first automated verifiers.

To move from academic research to automatic proofs that can be used in real-world industrial code, several steps were necessary. The first milestone was reached when Calcagno and Distefano jointly developed a technique where an analyzer can tune the precision of its analysis on-the-fly to different data structures of the analyzed program [R3].

Several routines of Windows Device Drivers were analyzed with this technique and numerous real bugs were uncovered, and confirmed by the Windows Kernel Team. The second milestone was the development of automatic proofs concerning the use of pointers in entire industrial programs (Linux and Microsoft device drivers of up to 10k LOC) [R4].

Finally, Calcagno and Distefano proposed the notion of bi-abductive inference, a breakthrough which allowed partial properties of entire open source projects in the hundreds of thousands or millions of lines of code to be shown [R5].

To put these results in context, just five years ago proofs of memory safety had been done only for toy programs in the tens or sometimes hundreds of lines of code.

In the relatively short time since its invention, the algorithms invented by Calcagno and Distefano have been incorporated into many (>30) tool efforts in the academic sector, including in groups from Harvard, MIT, Yale, Princeton, CMU, Berkeley, Paris, Copenhagen, Brno, Tokyo, Cambridge, Sussex and elsewhere.

More importantly, the algorithms developed by Calcagno and Distefano have been developed into products that have significant industrial impact. The algorithms form the foundation for the program verifier INFER developed by the high-tech SME Monoidics Ltd. The Monoidics INFER product has attracted customers across the world, including government agencies and industrial clients like Airbus, Mitsubishi, Toyota, LLNL, and ARM. Recently Monoidics has been acquired by Facebook to improve the quality and the security of their code base. Within Facebook, the verification technology originally designed by Distefano and Calcagno will impact over one billion users.

This research has attracted significant academic and industrial funding [G1-7]. Two EPSRC projects happened at QM in the period 2003-2011 (Local Reasoning about State [G7], Adaptive Heap Analysis [G3]). Calcagno received an EPSRC Advanced Fellowship [G2], and Distefano was the recipient of an RAEng fellowship [G1]. The outcome of this fellowship was used as a “Case Study” by the Royal Academy of Engineering in 2013 [P8].

Distefano is the 2012 recipient of the BCS Needham Award, made annually for a distinguished research contribution in computer science by a UK based researcher who has completed up to 10 years of post-doctoral research.

Monoidics Ltd is a participant in the Correct and Efficient Accelerator Programming (CARP) Consortium, along with project partners ARM, Realeyes, Rightware, École Normale Supérieure, University of Aachen, University of Twente, and Imperial College. In 2011 CARP has been awarded a three year Strep European grant worth 4 million euro.

Press Coverage: The work of Monoidics Ltd has received extensive press cover: in Japan, a primary market for the tool, see for example [l4]; in UK in the context of the Tech City [l3,l9]; In other international press in context of the CARP project [l5,l6,l7, l8]