From Behaviour Analysis to Re-Identification

The Computer Vision Lab has pioneered visual analysis of behaviour since the early 1990s. The field has become a significant focus world-wide, underpinning technologies for surveillance, retail, robotics, healthcare, HCI. Commercialisation of early work on face and gesture recognition was licensed to a start-up Safehouse (1998-2010). 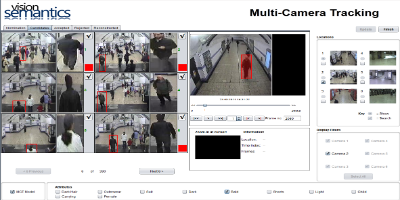 Recent work on behaviour recognition, semantic video search, crowd analysis, person re-identification has led to a spin-out Vision Semantics in 2007 which has attracted investment to a joint venture from a global market-leader in the banking sector. It has also benefited UK government services and industrial competitiveness. 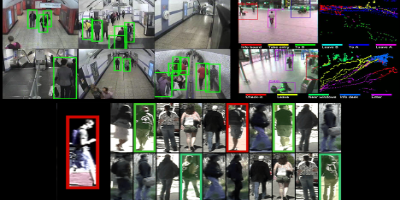 QMUL's Computer Vision Lab has undertaken substantial research programmes in collaboration with DSTL, MOD SA/SD, the US Army Labs, Vision Semantics and Safehouse Technologies to develop robust and scalable mathematical models and computer algorithms for automatic detection, tracking and recognition of object behaviour patterns captured in distributed CCTV cameras from a distance in public spaces, solving a significant challenge on how to analyse and effectively filter massive amounts of public space video data to find “needles in haystacks” [1,6].

There has been an accelerated expansion of Closed-Circuit TeleVision (CCTV) camera systems in public spaces ranging from transport infrastructures, shopping centres, sports arenas to residential streets, serving as a tool for crime reduction and risk management. Current CCTV surveillance continues to be a repetitive, time-consuming manual task that is often reliant on a human operator to spot a momentary incident occurring on dozens of monitors concurrently. CCTV systems rely heavily on human operators to monitor activities and determine incidents, e.g. tracking a suspicious target from one camera to another in a large area of distributed space, or across disjoint views. However, there are inherent limitations to employing unsupervised human operators due to the lack of a priori knowledge for what to look for.

Consequently, most existing CCTV recordings are never replayed, or at best retrieved only after an incident had occurred. Very little if anything, is known about what exactly has been recorded. When a major incident occurs, the police have to review thousands of hours of video recordings to look for a single event that may only last a few seconds. Even if the precise image frames of interest are identified, the image data can often be of insufficient quality either for recognition or as evidence.

There is a massive demand from the commercial technology providers and end-users for activity- and behaviour-based semantic video content analysis to enable fully automated and highly selective screening and search of salient events and objects (e.g. a watchlist) in the colossal amount of video data generated from both infrastructure CCTV cameras and mobile devices. Currently there is no suitable solution on the market. Existing video analytics suffer from (a) crude signal thresholding, (b) hard-wired configuration requiring specialist setup per application domain; (c) rule-based detection systems inflexible and not scalable to different operational conditions; (d) unacceptable false alarm rates, poor usability for user control.