Traditional UWB antennas are bulky in size, which limits their applications. State-of-the-art radio systems require antennas that are:

Our pioneering work in this area has led to the significant contributions to the UK Ofcom Spectrum Framework Review and the developments of new products and business opportunities, new technologies for assessing the Electromagnetic emission on the mobile handset and for smart meter deployment, and wearable antennas deployed in the battlefield to reduce the load and provide smart communications for dismounted soldiers.

The underpinning research has generated several impacts on public services, the environment and the economy. 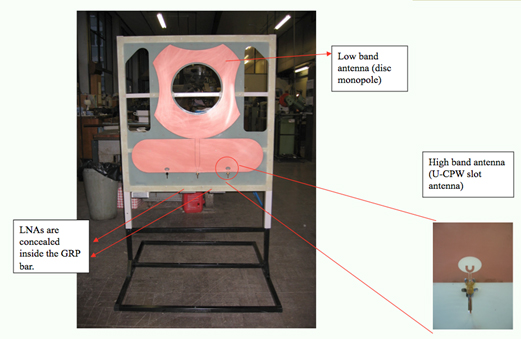 Spectrum sensing antenna system for OFCOM
ital for it to monitor interference over this wide frequency band. The group, teamed with MASS Ltd, developed an Automatic Interference Monitoring System for Ofcom to examine the increasingly congested EM spectrum over 40 sites across the country during 2005 - 2007. This work has constituted a major contribution to the Ofcom Spectrum Framework Review Report published in April, 2008. This technology enables Ofcom to monitor/regulate the 3G radio bands for better mobile communication services.

Impact on the environment

With the integration of multiple functions on mobile phone handsets, the EM emission from different components has caused interference to the radio channels, which burdens wireless networks, causing excess power consumption. Sony-Ericsson, have funded the group to develop wideband test equipment for detecting EM interference on mobile terminals since 2007. This work has led to a patent application (EU Patent Application No: 08100712.2,). In 2008, Innovation China-UK funded the group to commercialise the developed technology in collaboration with Beijing University of Posts and Telecommunications, China. Two specialist test units were built and sold (one to Sony-Ericsson and the other to Wavetown Communications Ltd, China). The developed products enable the mobile handset manufacturers to assess their mobile phones and make sure the products are in ‘green’ operation. 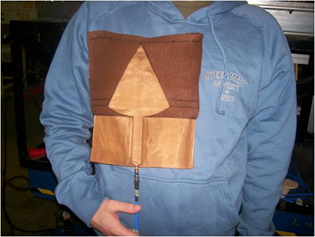 Traditional UWB antennas are bulky in size, which limits their applications. Built on the Antenna group’s extensive expertise and experience in antenna engineering, Professor Xiaodong Chen and his team proposed a printed version of the UWB monopole for the first time, in which the ground plane is printed on the substrate offering a compact flat solution. Furthermore, the QMUL group identified the operating mechanism of planar UWB antennas as the combination of overlapping multiple resonances and travelling waves and this technical breakthrough has resulted in an explosion of research work on the printed version of UWB antennas worldwide [R1]. A variety of compact UWB antennas were developed in the group for various applications funded by the UK government and industry.

The principles of UWB antennas were further exploited for designing broadband couplers for deployment in ultra wideband power line communications under a DTI/EPSRC Technology Programme project. In addition, the concept of UWB antennas as a compact wideband array for airborne remote sensing was successfully developed by Parini & Chen via an industrial funded PhD studentship from Selex Galileo Ltd.

Lead by Prof. Yang Hao the group was the first to apply UWB technology for body area networks in collaboration with University of Birmingham, which led to a seminal book on the topic of body-centric communications [R2] and three EPSRC research grants (> £2M) both jointly held with Birmingham covering the period 2003-2013. 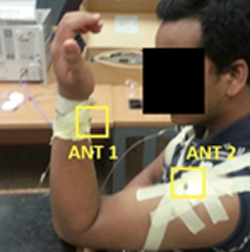 The work [R3] was the first in the area of UWB for body-centric networks and is considered to be one of the most cited papers on UWB antennas effects on the human body propagation channel. The research has attracted early-stage researchers attending three EU supported doctoral schools held at Queen Mary (http://www.antennasvce.org/Community/Education/Courses/Locations, European School of Antennas).

The subsequent research activities in this field led to the design and evaluation of UWB antennas coupled with tunable electronic circuitry to be used in smart and cooperative personal and body area networks (EPSRC First Grant- Alomainy) The group has recently secured a TSB grant with the Shadow Robot Company for 12 months to further investigate the research challenges behind UWB localisation of human hands and translate it into potential commercial applications.